A European Handbook for Identifying Conflicts and Designing Solutions

This chapter introduces the integrated approach to minimising habitat fragmentation due to transport infrastructure which is developed in subsequent chapters. The scoping process, avoidance, mitigation and compensation are introduced and the importance of early consideration of habitat fragmentation and consideration of the different scales of integrated solutions are discussed.

The best practice approach promoted by this handbook for planning new or upgrading existing transport infrastructure adopts the following principles for coping with the threat of habitat fragmentation. 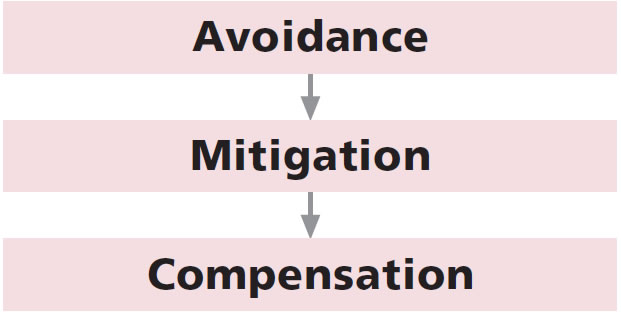 The basic philosophy is that prevention is better than cure in avoiding the negative effects of habitat fragmentation. Where avoidance is impossible/impractical, mitigation measures should be designed as an integral part of the scheme. Where mitigation is insufficient or significant residual impacts remain, then compensating measures should be considered as a last resort. Although the focus is mainly on new roads, the principles should also be applied to existing roads where repair and maintenance, relationships with other fragmentation sources and the use of existing engineering works should be examined.

Within this system, two of the key questions to be addressed are when are measures needed and what are the criteria for success? This approach forces infrastructure planning to look outside the normal bounds of the transport corridor to examine the development of the whole infrastructure network and wider landuse issues including national and international spatial planning strategies. Measures within the infrastructure corridor must include a consideration of the adjacent landuse and planned development as this may severely reduce the efficacy of any mitigation or compensatory measures.

Scoping: a process to identify areas to be avoided

The study area is evaluated for environmental interests and constraints to determine conservation issues. Criteria such as habitat diversity, rarity of habitats, conservation status, important landscape elements, species diversity, presence of red-list species and protected species may be used. This is explained in more detail in Chapter 5.

Conservation criteria are the basis for analysing the possible negative effects of the infrastructure route, and for identifying points of conflict between important natural features and the suggested alternative alignments. The sensitivity of habitats and populations to fragmentation, the mobility of animals, the size of their home ranges and their sensitivity to disturbance are all ecological factors that should be considered in this assessment.

All efforts must be made to maintain ecological structures connecting habitats and populations. Particular attention has to be paid to rivers, streams, riparian forests, wooded corridors, networks of hedges, and dikes, which can often be the last refuge for many species in intensively used landscapes.

It is important that transport infrastructure engineering work is co-ordinated at all scales so that all engineering works are sympathetic to habitat and species needs. Even at the detailed site level, minor changes in engineering specifications or design can have significant benefits for wildlife (see Chapter 7).

Avoiding or minimising fragmentation effects is a major consideration during the planning of new infrastructure, the upgrading of existing road and railway routes and the management of problems associated with existing roads and railways.

The avoidance of ecological impacts by not developing the proposed infrastructure may be the only solution to avoid fragmentation of vulnerable habitats. Adapting the alignment of the infrastructure to avoid bisecting vulnerable habitats, reducing the landtake of the road corridor or reducing disturbance to adjacent habitats minimise the impact but do not entirely avoid fragmentation. Avoidance of habitat fragmentation should become the first principle applied in the:

The barrier effect of transport infrastructure (see Chapter 3) can be mitigated by employing different kinds of measures, such as over- and underpasses aimed at maintaining landscape permeability through the use of animal crossing structures or adapting engineering works to act as fauna passages. A wide variety of measures are described in Chapter 7. The key questions related to mitigation measures are: 1) what is the problem and where is it located; 2) what kind of measures are appropiate to solve it; 3) what design is fit for the purpose?

When fragmentation is unavoidable and mitigation measures are unable to compensate for the loss, damage or degradation of habitat, then compensation in the form of habitat creation may be the appropriate response to achieve ‘no net loss’ because of infrastructure development plans (see Chapter 8). The habitat creation scheme aims to provide additional habitat of appropiate quality and type to compensate for that lost or damaged by infrastructure development.

For all these approaches (avoidance, mitigation, compensation) adopted measures should be checked to ensure they conform to design and quality standards and that they work (see Chapter 9).